Space is often defined by what is lacking.  No air, no water, no heat, no noise.  The vacuum of space is the epitome of nothing.  Yet, from this tribologist’s point of view, space is full of grease.  In fact, grease has become an essential element that enables numerous space missions that open new frontiers in our understanding of the universe.  Grease also plays a critical role in ensuring that vital systems ranging from telecommunications satellites to navigation systems operate flawlessly and efficiently.  History, however, has shown that space can be unforgiving and that each space bearing or mechanism has unique lubrication needs.  In this keynote presentation, the requirements for space lubricants and the proper selection of a wide range of space greases will be reviewed.  A common theme is that space is a rather greasy place.

Biography
Dr. Christopher DellaCorte is NASA’s Senior Technologist for Tribology (friction, wear and lubrication) and Rotating Machinery.    He began his NASA career in 1985 as a graduate student of Case Western Reserve University and joined NASA as a permanent staff member in 1987.   He has degrees in Fluid and Thermal Sciences, Mechanical and Aerospace Engineering with a deep emphasis in Materials Engineering. 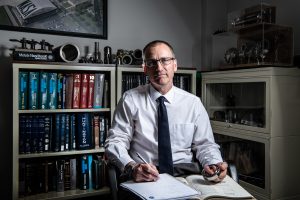 Dr. DellaCorte has played key roles in many failure investigations including several on the International Space Station (ISS), Mars Curiosity Rover and NASA’s new Orion spacecraft.   His earlier work on solid lubricant technology was recently recognized as NASA’s Government and Commercial Invention of the Year. He began exploring NiTi alloys for bearings, gears and mechanical components in 2004.

Dr. DellaCorte is the Editor-In-Chief of the journal Tribology Transactions and is a fellow of both the American Society of Mechanical Engineers (ASME) and the Society of Tribologists and Lubrication Engineers (STLE).   In addition to nine awarded patents on tribology technologies, Dr. DellaCorte has published well over 100 peer-reviewed papers and journal articles and has been recognized with prestigious national and international level awards.